Recognition to Civil Aviation in Montenegro in the United Nations 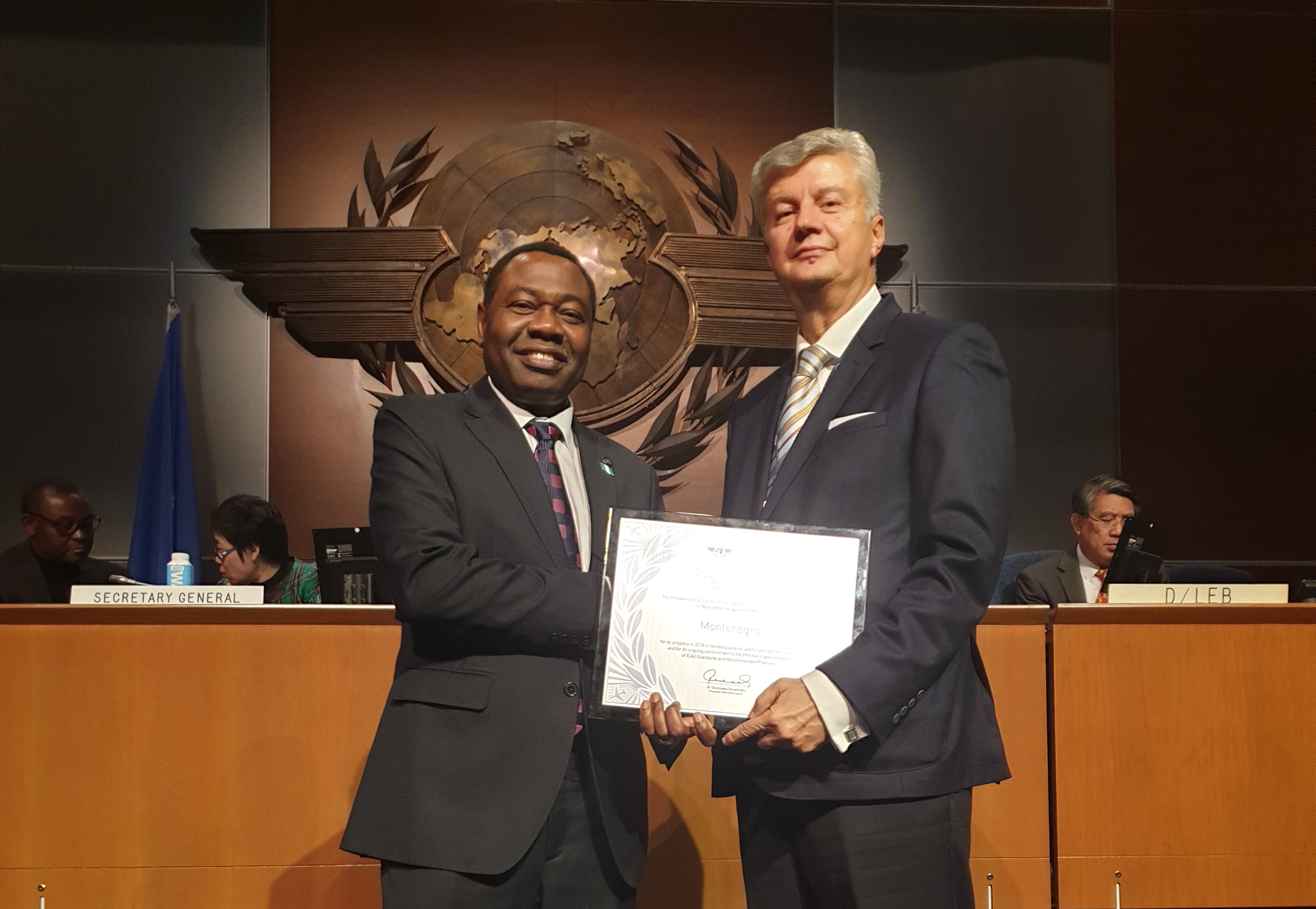 At the ongoing session of the General Assembly of the International Civil Aviation Organization (ICAO), the largest aviation institution of the United Nations, Montenegro was granted the recognition for noted results in commitment and the development of aviation safety.

The ICAO Council President, Dr. Olumuyiwa Benard Aliu granted the plaquette, i.e. the Certificate to Montenegro in Montreal, stating that he is honored to recognize the efforts of Montenegro for its progress in 2018 in resolving aviation safety oversight deficiencies, and for its ongoing commitment to the effective implementation of ICAO Standards and Recommended Practices.

Dragan Djurovic, Director of the Civil Aviation Agency of Montenegro, who is also the chief delegate at the session of the ICAO General Assembly, stated that this plaquette granted by the umbrella aviation organisation in the world represents great recognition for the State, Government, aviation industry, and especially for the Civil Aviation Agency that was managing this process. "In patient and systematic manner, year after year, we were raising the level of civil aviation security and safety and we were harmonising it with the highest international standards. Through serious work and commitment we achieved high level of implementation of safety standards which was confirmed by the European institutions, and right now by the ICAO".

In the period between 20 January and 29 January 2019, the International Civil Aviation Organization (ICAO) performed the assessment of the work of the Civil Aviation Agency, as well as the assessment of the overall aviation system. The official percent of effective implementation of Montenegro in the area of civil aviation confirmed by the ICAO after the assessment is 87.99%, which is a huge success when compared to the previous result from 2010 (64.71%). This result is the reason for granting this prestigious certificate.

In the period between 24 September and 4 October 2019, the 40th session of the International Civil Aviation Organization (ICAO) Assembly, that takes place each three years, is being held in Montreal, Canada, with almost 2000 participants representing 193 ICAO Member States.

The ICAO is a UN specialized organization, established in 1944 with a role to create and modernize international aviation standards and recommendations, with the aim to ensure secure, efficient and arranged development of aviation.

At the ICAO Assembly, Montenegro was represented by the delegation led by Dragan Djurovic, Director of the Civil Aviation Organisation, whose members were also Muamer Hajdarpasic, State Secretary in the Ministry of Transport and Maritime Affairs, and Marijana Vukcevic, Senior Advisor for International Cooperation in the Civil Aviation Agency.